I believe this will be the first post I will write only in English. Most people reading my blog are, if not fluent, at least competent in English, whereas this can't be said the other way around. I don't really have much time, so writing it in English will be faster and easier.
I am so nervous! Not because of the Open Days, not because I am actually going to the UK tomorrow (it's the second time in three months, so that's not special, but this time I'm going up North, all the way to Scotland, this has got me amazed as well), not because of all this logistical stuff.
Nope.
I am nervous because the whole application process is here. Deadlines are closer everyday, and, if all goes according to plan, my application must've been submitted before the 15th (of October, of course). I have to arrange the CSAS form (I guess I've had a LTI, so... besides my parents have not attended uni, any of them, they both have an NVQ but that's about it) for my Cambridge application, I have to prepare myself for the SAQ that Cambridge sends to their applicants (I think the acronym goes like that, sorry if I'm mistaken - it's basically a suplementary application form, specifically for Cambridge and your college). I have to decide which other unis I'm applying to... and here comes this week. I shall be visiting the University of Bristol on Wednesday, when they hold an Open Day; Durham University on Thursday, where I have an appointment with someone at the Politics department; the University of St Andrews on Friday, where I'll be making an alternative visit (half-meeting half-tour open-day-like); and on Saturday I'll be visiting the University of Edinburgh, where an Open Day is also being held.
I also have to revise my PS again and again until I feel that it can't be improved in any way, even knowing that I will fail miserably and receive no offers sending it like that! I have to speak to my referees and arrange everything to be ready asap, as time's flying and I'd like to submit my application by the 8th.
This is the most important decision I've ever taken in my life... so far. So I guess that, up to a certain point, it's kinda logical that I feel nervous and worried about this. Probably, in a year's time, I'll be laughing about this all, writing to you from a hall of residence in some British university... but until that happens, I shall be nervous anyway.
I have already registered to do some exams in January. I won't be going to England on January, I'll be staying closer to Barcelona: in Palma. There's an Edexcel-approved centre there which has accepted me as an external candidate, which is good, and though I still need to confirm a couple of details, they already have my details and will register me to Edexcel. I was initially going to England because Sociology was with AQA and I couldn't sit those exams anywhere outside the UK (including Gibraltar). But, as time's rushing a little bit, I've decided to drop this fourth subject, the least important of all, and focus on the other three (all Edexcel) which are way more important and relevant to my prospective courses.
By the way, I have to feel those details in the UCAS form (listing the qualifications as pending, obviously, but anyway I have to do it). Which do you recommend me to put?
- IGCSE English language / IELTS / CAE.
- A-level Spanish / AS-level Spanish. (Whether to do it or not, being a native speaker may not be really relevant but it's extra UCAS points so it may be worth it.)
I'd sit the IGCSE/A-level exams in June, most probably, and the CAE/IELTS probably in January. I'm scared anyway because Cambridge require a 7.0 in IELTS, which I don't think I can attain, so at that level (and only for Cambridge and St Andrews, the rest of unis have lower requirements) I'd be better off doing the CAE, I guess. I don't know, anyway, so I'd thank you if you advised me something in that matter.
We're a bit short of time, but hopefully in three weeks all this stuff will be over and I'll be able to concentrate on studying to get the best possible grades.
I'm now off to prepare my suitcase... I have to get all the winter clothes ready first, I haven't used them since last April. :D
Have a good week!
Edit: I'll add a map for you to see the planning of the next few days. Enjoy! 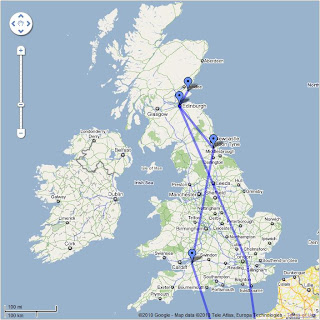